skip to main | skip to sidebar

Charles Williams Has a Buyer 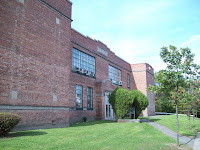 Since the City of Hudson acquired it back in 2003, in exchange for the lot on Columbia Street where county health department building now stands, the Charles Williams School has stood vacant but not for want of plans to reuse it. First it was going to house the police department and city court. Then it was going to be an intergenerational center. Then a plan was floated to make it the location of HCSD's Alternative Learning Program combined with a C-GCC satellite site and a business incubator. Most recently it was going to be the county's emergency shelter for women and children. The good news is that it's not going to be any of those things.

The City intended to sell the building at a public auction on October 17. No one showed up for the auction, but bidding for the building happened anyway. Last night at the Common Council Finance Committee meeting, Treasurer Eileen Halloran announced the winning bidders: Steve Johnson and Walter Sudol, who offered $275,000. Other bidders were Colin Stair, the Islamic Community Center, and a fourth party.

Johnson and Sudol, who have a house in Ancram, plan to use the prewar school building for artists' studio space and to exhibit their own art collection. They have expressed their intention of restoring its original interior configuration.
Posted by Carole Osterink at 12:55 PM

Glad to hear that the school has a buyer. I hope it will go through. $275,000 seems like a mighty fine price.

Carole Osterink
This blog takes its name from the 1848 novel by Hudson author Alice B. Neal. The original Gossips of Rivertown cast a gimlet eye on Hudson society in the mid-19th century. More than a century and a half later, the new Gossips carries on the spirit of the original, but in a different genre and with a different focus.